Please notice the following information if you would like to order a ¼, ½ or whole Beef  a ½ or Whole Pork or a Whole Lamb in 2018.

If you want to get on the list for beef or pork : Please use the online order form and also e-transfer a deposit to this email address. First come, first serve.

For Lambs is no pre-order or deposit required this year. We are sure we will have enough lamb ready for delivery in fall 2018 to supply everyone who wants one.

Quarter, half or Whole Beef

half or Whole Pork

The next pig butcher date with the opportunity to order a half or whole Pork is March 6th (will be ready for the delivery in April). Please order before March 6th.

No pre-order or deposits required for lambs this year (delivery in fall). We are sure we will have enough lamb ready for delivery in fall 2018 to supply everyone.

Your team on Big Bear Ranch

our first pigs from the 2017 litters will be butchered this Thursday. If you would like to have a custom cut half or whole of our healthy pigs, please email us before Tuesday night, because we want to sort them on Wednesday. These orders will than be ready for the next delivery on December 2nd, 2017.

Our pigs get only certified organic hog grower in addition to their nutritious pasture. Therefore, you can be sure they are GMO free and their feed is not contaminated with glyphosate (ingredient in RoundUp, causing cancer with high certainty). Most Conventional farmers spray grains, sugar beets, potatoes with RoundUp to kill the plant to save on costs for drying.

The growing epidemic of gluten intolerant people is probably one of the early warning signs of this dangerous practice.

We hope you are all well. The new year kind of just started and there happened a lot on Big Bear Ranch already.  I am totally behind my office work!

Most important and best news first: My first grandson, Finnegan Arthur Krumsiek, was born on 08.02.2017. The whole family is totally happy, although the young parents (Florian and Stefanie) are missing out on some sleep because Finnegan wants to drink every hour.

Steffi worked at the vet clinic until 3 days before giving birth and – despite being heavily pregnant – spent much of the rest of her remaining spare time on the ranch and with the animals.

Now the rest of the February News:

Pigs: Last Tuesday I brought this 13 nice finished pigs to our butcher in Kamloops for our March Delivery: 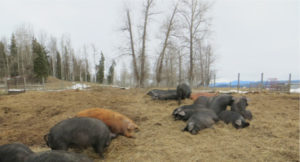 We will bring two more loads of pigs to the butcher, on March 21st and on April 11th. Then all 54 pigs from last spring will be butchered and we have to wait until the newborns of our latest litters (January 2017) will be ready. That will probably not be until December.

So far we had three pig litters this year: 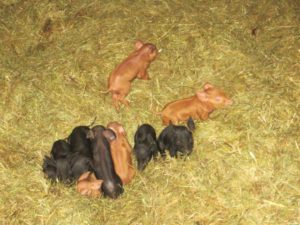 That leaves 3 more sows to go!

Cattle: All beef from the first butcher dates are already sold. Now we are looking at an August or September delivery if you order some right now.

Two days ago we heard the first geese, and the woodpeckers are drumming like crazy. The weather is uncommonly mild for February right now. The Dogs and the cats enjoyed the sunshine already – as we all did. 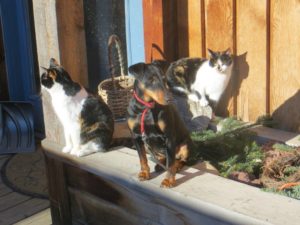 Maybe we have an early spring like last year!?
Now I have to visit Finnegan, bye bye
Rainer

Thanks for doing what you do!
Mark Ameerali