The new online shop is close to being published, hopefully only 2 more days of waiting.

Being a member of the BBR community gives you the satisfaction to know that you are supporting a family farm, practicing regenerative agriculture and raising animals humanely.

You will have access to nutrient dense meat, produced in harmony with nature while protecting biodiversity and improving soil life.

The three levels of Big Bear Ranch membership are:

Are you ready to become a member of the Big Bear Ranch Community?

Than please go to:

to choose your level and find out how to get involved.

This Wednesday is the first butcher date for beef in 2019
If you would like to get on the list for 1/4, 1/2 or whole beef, please order via the order form until Tuesday night.
Please also write under comments when you would like to have it delivered (July, September or later this year).
The first delivery for beef from this group is the 26th (Kamloops & Okanagan) and the 27th of July (Lower Mainland & Vancouver). There are still a few available.
The next opportunity to order a 174, 1/2 or whole beef will be ahead of the September delivery.

I would like to thank all of you who had placed an order for the May delivery. Pretty much everyone showed up on time!
We talked a lot about the hot weather and how much we needed rain.
Well, our prayers helped: We had lots of rain in the last few days and everything is greening up nicely.
The first calf is on the ground, the sheep are halfway through lambing, spring is definitely here to stay .

The snow is gone and the first flowers enjoy the sunshine. Now we are busy fixing snow damaged fences and preparing pastures for the grazing season.

On April 12th we moved the cow herd from the pasture where we did the hay feeding all winter long. Now they enjoy an area with lots of over mature aspen. These aspen are budding, which provides a very nutritious feed together with the juicy bark of the young twigs. Once the aspen are laying on the ground, the cows are able to eat the bark and buds. Therefore we spaced the aspen stand, taking out the damaged (moose is peeling the bark off) and dying trees. They also enjoy the first green grass of the season.

The first litter of Large English Black pigs is on the ground and the first calf, too.

This year we have one male turkey just for fun. He herds the chicken like a rooster.

We wish you all a sunny spring and no fires, please!

The Green Gazette wrote and published in its June/July/August 2018-Issue an article  about our Ranch that we would like to share with you.  You can either read it below or follow the link to The Green Gazette above.

Animals are raised with great care at Big Bear Ranch, where a high standard of animal welfare has been in place for decades. What the animals eat, how they live, and how they’re treated recently resulted in another successful inspection by Animal Welfare Approved (AWA), and a growing list of customers who love the food and the way it was raised. 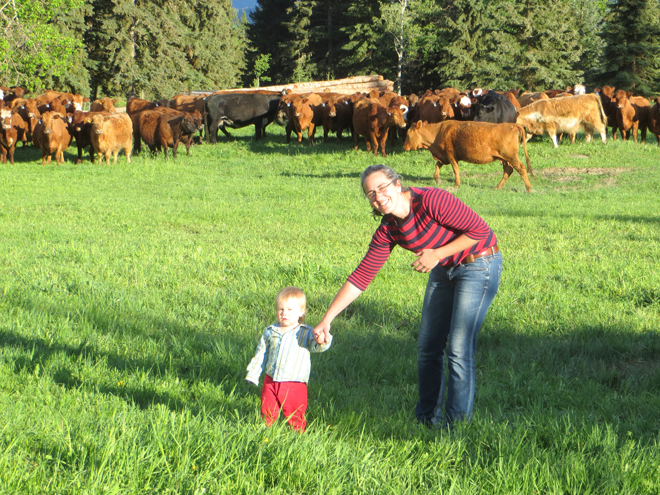 Big Bear Ranch, raising sheep, pigs, and cattle, is owned and run by Rainer Krumsiek, his son Florian, and his daughter-in-law, Stefanie. Since March 2016 the 1,100-acre ranch with its mixture of pasture and forest has been animal welfare approved and grass fed certified by AWA All the food that goes into Big Bear animals is 100% organic.

Animal Welfare Approved by A Greener World is a food label for meat and dairy products that come from farm animals raised to the highest animal welfare and environmental standards. The program was founded as a market-based solution to the growing consumer demand for meat, eggs, and dairy products from animals treated with high welfare and managed with the environment in mind.

Krumsiek said Big Bear used to be certified organic but explained he wasn’t happy with what happened to that whole movement. “The certification process was taken over by big corporations and they make the rules, which are watered down,” he said. “For example, you can buy hydroponic veggies as certified organic, and I didn’t agree with that.”

He didn’t grow up around animals, but always had an interest in the natural world. “The only animals I had as a child in Germany were tadpoles in a jar in springtime,” he noted. 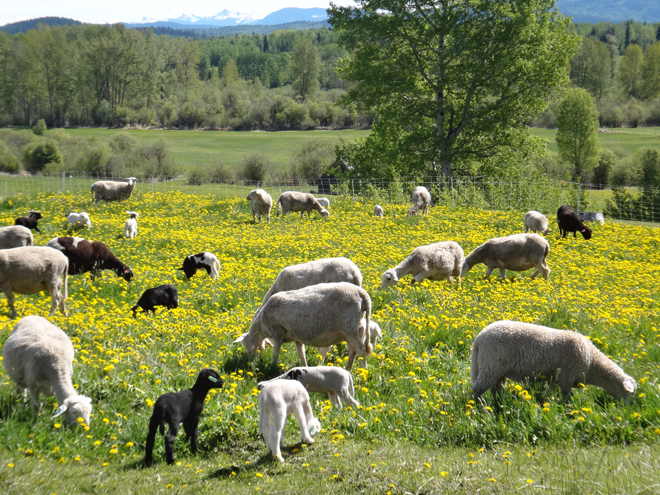 Ewes with two-week-old lambs out on fresh dandelion pasture in May. Photo: Stefanie Krumsiek

The journey from his younger years in Germany to a becoming a rancher in Horsefly was a long and interesting one. “When I was in school, I wanted to become a forester. In Germany, someone questions you and recommends a profession, and I remember the guy who talked to me,” Krumsiek added. “He asked me a couple of funny questions, including how many teeth a sheep has, and told me I should get into trades.”

So, he took an apprenticeship and learned welding, metal work, and mechanics.

After a detour into microeconomics with the idea of working with his father, Krumsiek looked again at becoming a forester, only to be told there was a three-year wait for the schooling.

“The guy said, given what I told him about my interests, I should study landscape ecology—learning about plants, climate, soil, design, and more,” he continued.

“When I got my degree, I worked with a famous landscape engineer. I got to specialize in high-end, private gardens and built my own company.”

Krumsiek was finally able to have animals: dogs and Icelandic horses, which he really liked. He said he learned to train dogs and horses the natural way: training them, not breaking them.

“When we immigrated from Germany to [Kelowna] BC in 1993, we bought the horses and boarded them until we found a ranch of our own. When we did, the place where we boarded them gave us five old geldings, and we started our herd here at Big Bear Ranch with 10 animals,” he said.

“Icelandic horses are very sturdy, strong horses that are great to ride, can pull a carriage, and be used for logging. They were my wife’s hobby before she passed away, and we still enjoy them today.”

Cattle came next, representing an enormous learning curve at Big Bear. “We boarded cattle here first, and then bought our own herd of 106 animals, and built it to 250 cow-calf pairs. In the first years we fertilized the fields according to soil tests and still needed 3.5 tonnes of hay to get a dry cow through the winter,” he said.

“In spring, the cows looked awful and next winter we started to feed grain to get them through. 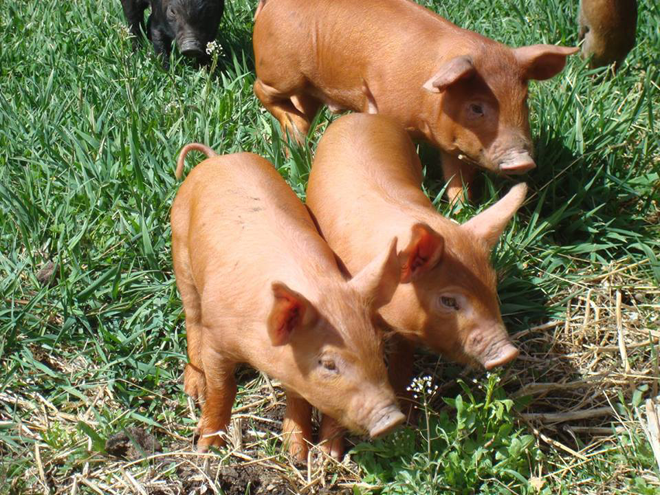 “After learning that commercial fertilizers create funny proteins, which are more a burden than nourishment for living organisms, we stopped with the fertilizers and applied management intensive grazing. Our cows are contained in part of a field using electric fencing, where they graze what they are supposed to eat for one day. The next day they are moved to another section, and then another.”

This way the grass has only one day of disturbance, said Krumsiek, and then needs two to four months of recovery time. It takes that long for the roots to recover.

He said in one day grass can show one to two inches of growth, and because cows love that fresh new grass the best, they will always go back to it. He explained that all your good grasses will be eliminated in two to five years.

“Knowledge of the growth of grass is the basis and electric fencing the tool,” he said. “For years my recovery period for the forage was way too short.”

They also changed the calving season from February to May. “Calving in February and March should be forbidden by the SPCA because it is cruelty to animals. A calf born in February or March has the same coat as a calf born in May and is much more vulnerable to the cold,” he continued.

“The summer calves are a bit smaller, so the birth is easier. The last five years I’ve never had to pull a calf, and we have never had one case of Scours.”

At Big Bear they take a humane approach to weaning, too, letting the calves stay with their mothers up to 11 months.

“The most humane way to separate them is with electric fence,” Rainer said. “When a calf wants to get to its mother, it will wiggle through barbed wire. It won’t go through an electric fence: there are far fewer injuries.”

He added that when they are weaned more naturally, there is very little bawling from the calves.

Big Bear’s commitment to animal welfare is the same for sheep and pigs, too. From birth to butcher, it’s done right. Even the inspected butcher facility is approved by AWA.

How animals are treated means everything to Krumsiek, who added that more and more people are aware of the correlation between a healthy animal and healthy meat.

“They care about the quality of the food,” he said, “but when I ask a new customer why they choose to buy from us, the number one answer is because we treat the animals right.”

LeRae Haynes is a freelance writer, song writer, community co-ordinator for Success by 6, member of Perfect Match dance band, and instigator of music with kids 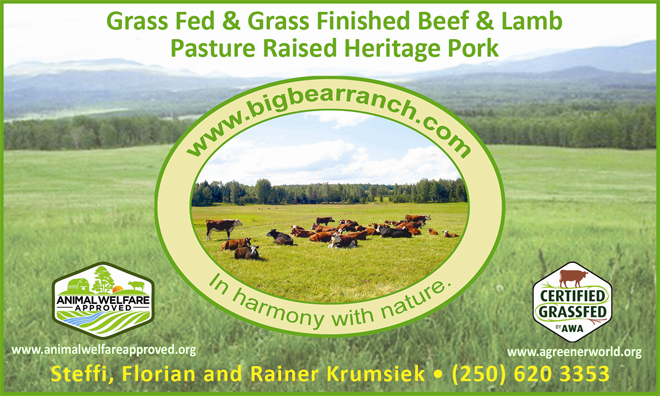 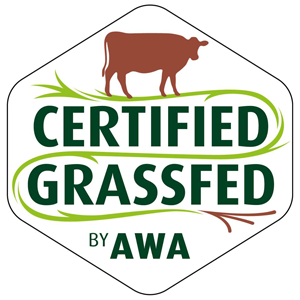 Thank you for raising such great quality meat.
Bryce Sailor